As Jackie read my last post she was very sad that I hadn’t mentioned a few of the “higher” points of our weekend.

Since I had travel to Richmond the afternoon before the show our display was pretty much done when we arrived Saturday morning.  I planned it so that we were there about an hour before the anticipated mad rush of the opening of the convention center.  Jackie and I used this time to set up our seating area and take a small look around.

Other vendors were also using this time to meander around the convention hall.  One of those vendors that strolled into our booth was and fella dressed in what I like to call safari garb.  You know….khaki shorts and tan shirt, hiking boots and I’m remebering a hat ( I could be wrong about the hat).  He was walking around looking at stuff while eating directly from a can.  He had opened it with a can opener and the top was still attached.  (I think hobos use that lid as a handle to suspend the can in the open fire to heat the contents of the can.)

It was such a strange thing to see…..(who the heck eats directly out of the can (pointing a finger at my sister))….that I had to ask him what he was eating.  Okay….what do you think?  My sister (the directly from the can food connoisseur) guessed all of the Chef Boyardees or Clam Chowder (her newest favorite).  But she was wrong…..and so would any guess that you could come up with.  What was he eating?

Okra!  A freaking can of cold okra.  So…of course he became known to us as Okra man for the rest of eternity.

Okra man makes a second appearance in this tale of woe and misery.

I have mentioned the Terri from Studio Baboo offered to sell me her Pipe and Drape, but I don’t think that I mentioned that Terri bought it before the invention of aluminum.  This puppy is made from steel.  I think that they lined the inside of the steel pipes with lead.  Can’t prove it……but really believe it because it is simply the heaviest thing that I have tried to carry in a long time.  Terri helped me put it in my car.  My husband helped me take it from my car into my trailer.  And gravity helped me take it out of my trailer at the convention center. 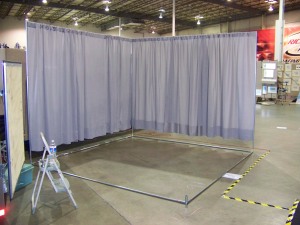 At the end of the show, we got everything taken down and packed away into the trailer with the only thing sitting on the floor of the convention center being the bag holding the pipe.  It comes in a long narrow bag.  Imagine a gym bag….but about 6 ft long with gym bag handles that you could put over your shoulder.  (if you were Shrek).  So Jackie and I are looking at each other and back at the bag.  Hmmmmmmmmm.  I’ve filled the trailer and in order for the pipe to go in…..it has to go ON TOP of the rest of the stuff.  Okay….she and I are not going to be able to do this.  I look around for someone….and guess what?  Okra man is walking our way.

“Hey…..anyway you could help me get the last thing in my trailer?” , I asked him.

Okra man declines because of rib issues but offers up his brother.  Now…I don’t know if okra helps grow boys like this brother….but man o man…..I’m trying hard to get Mister Tilley to enjoy him some okra.  This fella was Gooooood Looking.  Yes sir eeeee.  Young and all muscled up.  Just the guy for the job at hand.

I almost feel guilty asking this beautiful creature to break a sweat.  “Please, can you help us pick this last bag and put it on top in the trailer?”  I asked Okra man’s brother.  “Sure”, he says and reaches down and without testing the heaviness of the bag at all, grabs two handfuls of material from the bag and jerks it up like a bar bell.

Holy crap….I thought he blew his a**hole out across the convention center.  But he didn’t stop, he was on a mission and had an audience and a**hole be damned, he was getting this bag into that trailer if he died doing it.

Jackie and I had the hardest time not laughing at this stud muffin trying to walk this bag over to the trailer and lift it up and onto the pile already in there while his insides were trying to wiggle out his belly button.  I’m sure that he had to have some surgery when he got home.

Wow….that really made me appreciate my older husband’s common sense.  He may not be the stud muffin that he used to be, but he would have kicked it with his toe first…..then gingerly tried to pick it up a little….and then finally announced that it would have to stay at the convention center, cuz it was not going into that trailer.

Poster for the Show

This entry was posted in Just about me and tagged Richmond Art Awards, Setting up at shows. Bookmark the permalink.

One response to “Jackie’s request….”